When The Going Gets Tough, Klutt Takes Action

WHEN THE GOING GETS TOUGH, KUTT TAKES ACTION

EDMONTON, ALB: Klutt had his eyes set on the podium after the first half of the ‘Alberta Has New Energy 300’ where he managed to move up from 12th to 7th position. Following the pit stop, the #59 car was smashed into and driven over by another car that destroyed his front end causing Klutts front tire to launch off of the car and a tear in the brake line that left him without any brakes.

“I came into the pits and the crew changed the line and taped up the damage. Within the next 50 laps I had worked my way back up to 6th place and the car was on fire, but just as I was passing the 5th place car, the damage from being run over caught up with us and the lower control arm came loose”, says Klutt.

Following the crash, Klutt managed to hang on for the next 100 laps and still capture 9th position. Klutt said, “it would have a been nice to be on the podium with a torn up car but just wasn’t the way the night went.”

Qualifying was tight, with #59 just 0.10 off the leader giving him his starting position in 12th. Klutt was one of the first cars out so he knew the track wouldn’t be quite as quick.

After the damage caused by this week’s race, Klutt mentioned, “we are working hard to get everything repaired and will be heading to Saskatoon on Tuesday for the race Wednesday.” 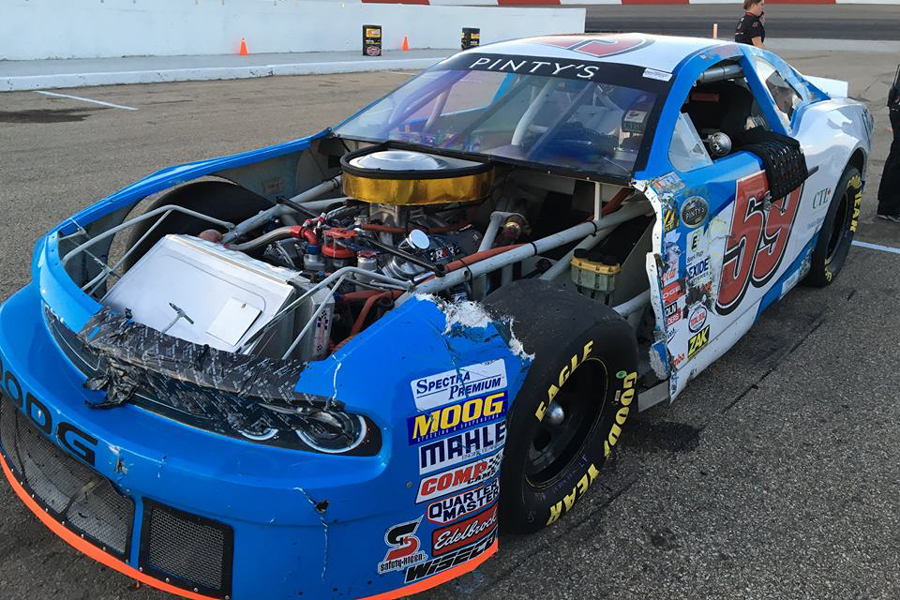